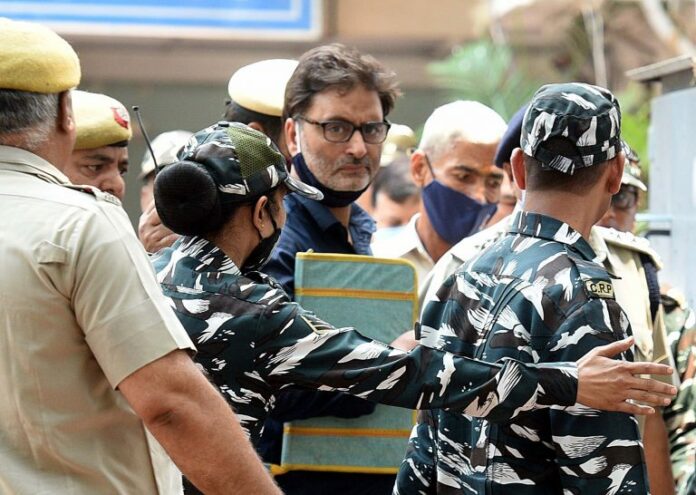 JAMMU, Nov 23: A special court here on Wednesday issued a fresh production warrant for physical appearance of jailed JKLF chief Yasin Malik for cross-examination of witnesses in a case related to the gunning down of IAF personnel by terrorists in 1990.
The Central Bureau of Investigation (CBI) informed the court that it has already challenged the order before the Supreme Court.The agency’s senior special prosecutor Monika Kohli said the much publicised case came up for hearing, with the Jammu Kashmir Liberation Front (JKLF) chief appearing through video-conferencing from Tihar jail and the other accused being present in the court.
“The court again issued a fresh production warrant for the physical appearance of Malik on the next date of hearing on December 22,” Kohli, who is also Senior Additional Advocate General, told reporters.
She said the CBI has already challenged the order for physical appearance of Malik before the Supreme Court as there is a direction from the Home Ministry because of another case pending against him.
“Since he has moved an application seeking his physical appearance, the court issued a fresh production warrant to facilitate cross-examination of witnesses by him,” she said.
On September 21, the court conceded Malik’s demand for the first time for physical appearance to cross examine the witnesses in the abduction case of Rubaiya Sayeed, daughter of former Jammu and Kashmir chief minister Mufti Mohammad Sayeed, by his group in 1989.
The special Terrorist and Disruptive Activities (Prevention) Act (TADA) court has already framed charges separately against the JKLF chief and several others in the two cases.
While the charges were framed against Malik and six others on March 16 last year in the killing of four IAF personnel in 1990 on the outskirts of Srinagar, charges against Malik and nine others in the 1989 abduction case of Rubaiya were framed on January 11 this year.
Malik is currently lodged in Delhi’s Tihar jail after he was arrested by the National Investigation Agency (NIA) in April 2019 in connection with a terror funding case, a month after his group was banned by the central government.