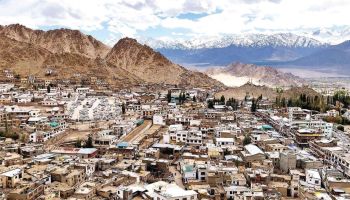 SRINAGAR, Jan 3 : The Union Ministry of Home Affairs has constituted a high-powered committee to discuss safeguards for Union Territory of Ladakh. According to an official order in this regard, the committee will be headed by Minister of State for Home Affairs Nityanad Rai.
“It has been decided to constitute a High Powered Committee (HPC) under the chairmanship of Shri Nityanand Rai, Minister of State for Home Affairs, Gol, for the Union Territory of Ladakh,” reads the order.As per the order, the committee has been set up to discuss measures to protect the region’s unique culture and language taking into consideration its geographical location and its strategic importance. The committee will also discuss measures to ensure protection of land and employment for the people of Ladakh, the order states.It will also discuss measures for inclusive development and employment generation in the region empowerment of Ladakh Autonomous Hill Development Council Leh and Kargil. The composition of the committee include Nityanand Rai, Minister of State for Home, Chairman, Radha Krishna Mathur, Lieutenant Governor, Union territory of Ladakh, Jamyang Tsering Namgyal, Member of Parliament (Ladakh), Chairman/CEC, Ladakh Autonomous Hill Development Council, Leh, Chairman/CEC, Ladakh Autonomous Hill Development Council, Kargil, Joint Secretary, Jammu, Kashmir and Ladakh Affairs, MHA, Director/ Deputy Secretary (Ladakh), Department of Jammu, Kashmir and Ladakh Affairs, MHA – member Secretary and one nominated member from MHA.