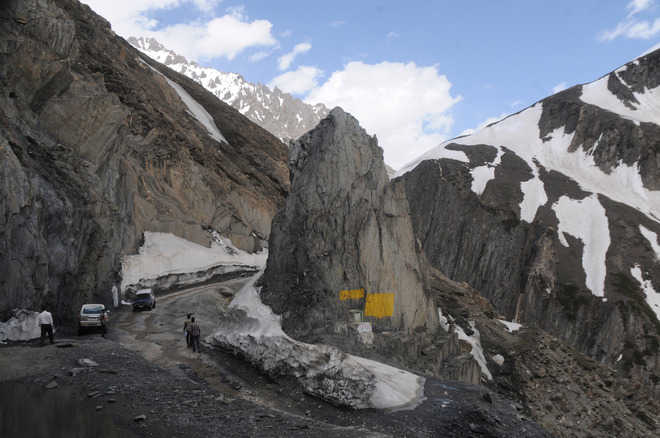 Ganderbal, Jan 03 (KNO): Defence Minister Rajnath Singh on
Tuesday virtually inaugurated the Srinagar-Sonamarg-Gumri
double-lane road connecting the Ladakh region with Jammu &
Kashmir.
The Defence Minister was in Arunachal Pradesh where he
inaugurated the Siyom Bridge and 27 other infrastructure projects
virtually which were executed by the Border Road Organisation
(BRO).
The projects comprise 22 bridges, including the Siyom bridge,
three roads and three other projects in seven border
States/Union Territories of Northern &amp; North-Eastern regions.
Eight of these projects are in Ladakh; five in Arunachal Pradesh;
four in Jammu &amp; Kashmir; three each in Sikkim, Punjab &amp;
Uttarakhand and two in Rajasthan. In addition, three telemedicine
nodes – two in Ladakh and one in Mizoram – were inaugurated.
Srinagar-Sonamarg-Gumri road was among the 28 infrastructure
projects which were virtually inaugurated by Rajnath Singh and
physically inaugurated by Deputy Commissioner Ganderbal
Shyambir at Hari Pora village of the district in presence of
Brigadier Saket Singh, Chief Engineer BRO Kashmir, officials of
BRO, army and district administration. All arrangements to
witness the virtual conference were made at the venue by the
BRO.
The SSG road is a strategic road that has a social and economic
impact on the population of Ladakh as they are dependent on the
daily needs of their logistics and essential commodities.