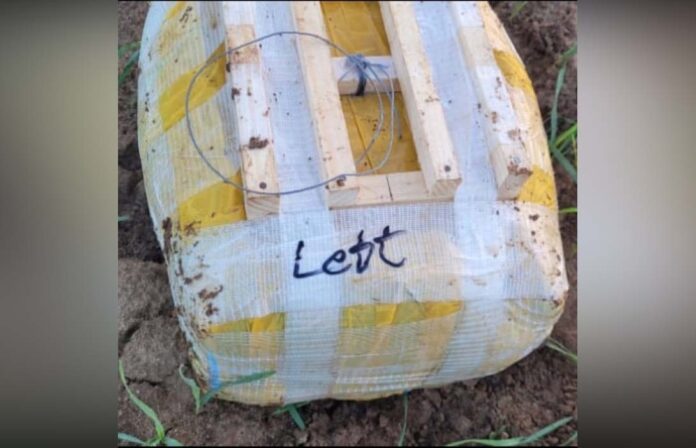 JAMMU, Nov 24: The Jammu and Kashmir police along with the special operations group recovered one suspicious package on Thursday, November 24, in the field near Chhani Manhasan in the Vijaypur area of J&K’s Samba. Upon inspection, the J&K police recovered arms and ammunition along with a wad of cash from the package which was dropped by a Pakistani drone from across the border.
Notably, following reliable input, J&K police spotted a package in the field in Jammu’s Samba in the early hours of Thursday. After getting the information about the suspicious package, security forces rushed to the spot including the bombs squad team of J&K police. According to the officials, the suspected package when recovered was sealed.


The J&K police recovered one steel Improvised Explosive Device (IED), two pistols, 4 magazines, several batteries and a watch from the package. They also recovered cash of around Rs 5 lakh from the package dropped in Samba.
Speaking about the recovery of the package, Additional SP Samba, Surinder Chaudhary said, “Police team from Vijaypur Police Station recovered one suspicious sealed packet today in the field near Chhani Manhasan in Samba, following reliable inputs. The spot is undisturbed and intact.
According to the preliminary information, this is a case of a drone dropping from Pakistan’s side attempting to smuggle in weapons and cash to the Indian side for carrying out terror-related activities in Jammu and Kashmir. As per the officials, there was a movement of a drone that was spotted in the area of Vijayapur which is opposite to Sialkot-Pakistan border.
Notably, senior police officials including SSP Samba reached the spot and monitored the operations. Also, searches are being conducted nearby as security forces suspect more drone droppings in the area concerned.
It is pertinent to mention that this drone dropping comes following a suspected drone detected by the Air Traffic Control (ATC) radars near Jammu airport in Jammu and Kashmir on November 20. Notably, the security forces were put on high alert after the suspected drone detection near the Jammu airport.