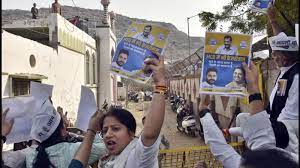 It’s confirmed. Elections, combined with the politics swirling around them, brings the worst out of politicians, and political parties.
Witness what has been happening in Gujarat, and in Delhi with the MCD elections, which has a 15 year anti-incumbency pulling back
on the Bharatiya Janata Party’s chances of making it fourth time in a row, and it gets clear that politicians will scrape the pits to show
rivals in bad light.
That said, defeat BJP and there will be Arvind Kejriwal, trounce AAP and there will be Narendra Modi. Whether it is Kejriwal or
Modi, the difference will not make a difference. Narendra Modi’s ‘achche din aayega’ was a joke. Today, if ‘achche din’ is garbage
littered all over the Delhi landscape, the BJP-helmed MCD should get the Oscar. The past couple of weeks, the BJP has been acting
as if it was the stellar role in Delhi!
And, now, with the three MCDs rolled into one, if the electorate bets once more on the BJP, Delhi Chief Minister Arvind Kejriwal
will have another power centre to contend with. As it is, Kejriwal cannot turn without bumping into Delhi Lt. Governor Vinai Kumar
Saxena. Multiple power centres are why Kejriwal has made it his mission to invade and occupy other states.
Punjab came along. Next could be Gujarat, because AAP’s electoral victories come out of the blue. That said, Gujarat is another
case study, different from Delhi and Punjab. In contrast, the Delhi voter is an opportunist, with the migrant alive in him, always looking
for something for nothing. Anything for free and the average Delhi voter is head over heels.
Freebies do not matter to the Gujarati, not as much when it comes to his vote. Kejriwal has understood this and would rather win
his own state’s MCD elections. He has been dreaming of taking the BJP by the horn with victory in Delhi MCD, and trouncing BJP
candidates in all the seven Delhi Lok Sabha constituencies. Till he does both, Kejriwal isn’t going to be king of all he surveys in the
national capital.
The 2024 Lok Sabha elections are still a ways ahead. But Delhi MCD is just days away. Kejriwal has already made his promises
public. A bouquet of 10 offerings if the aam aadmi votes the Aam Aadmi Party to run the MCD, and leave BJP in the ditch. The 10
guarantees include a garbage-free Delhi combined with beautification of the city-state, superior roads, doing away with landfills, and
an honest incorruptible MCD.
But AAP’s alleged corruption is Bharatiya Janata Party’s winning ticket. The BJP has been on the front foot at AAP’s front door
attacking the AAP with allegations and stings as if exposing AAP’s corrupt face gives it a certain vicarious satisfaction. Maybe, this is
because AAP and Kejriwal pride themselves for being the descendants of the ‘India Against Corruption’ campaign led by social
activist Anna Hazare, only to snub Hazare.
Arvind Kejriwal is particularly vulnerable because he wowed Delhi with his reputation for being above board on everything that the
majority of legacy politicians were below board. But some of the sheen has paled as Kejriwal fights a relentless run on his honest
politician stock with the BJP chipping away at it with sting-ops and con man tricks straight out of jail.
Kejriwal has to win the MCD come what may. Making a dent in Gujarat will suffice for the time being, but winning the Municipal
Corporation of Delhi is a must or else it will be like Modi losing Gujarat and going ahead into 2024 with a handicap. What Gujarat is
for Modi, MCD is for Kejriwal!
Both Gujarat and Delhi MCD are symbolically important for 2024. If Modi loses Gujarat, he heads into 2024 not just without his
flagship state, but also with no Gujarat Model to flaunt. The repercussions will be India-wide. If Kejriwal fails to wrest Delhi MCD from
the BJP’s grips, he goes into the next Delhi assembly elections with the Delhi Model in tatters, and with a dented reputation and
minus the spring in his step.
The BJP faces tough anti-incumbencies in both Gujarat, and the capital’s MCD. Yet, if Kejriwal cannot beat BJP with such odds in
his and AAP’s favour what is the bragging all about? As it is, a number of opinion polls give the BJP Gujarat, leaving to AAP only
Delhi MCD, if at all. Himachal Pradesh is completely out of the AAP orbit.
Thus, the MCD elections are politically significant to both the BJP and the AAP. The corruption charges against AAP leaders will
stand or come unstuck in the voter’s perception depending on whether the AAP trounces the BJP, or the BJP bounces back to a
fourth unprecedented term. If the AAP loses, Delhi’s politics will change straightaway. The Delhi mayor will be a rival power.

The MCD election will be held on December 4. Sadly, there is no Congress to talk about in the fray. Sheila Dikshit is a fading
memory, and Rahul Gandhi is too big for municipal elections. The day Rahul Gandhi realizes every drop counts for making an ocean,
he will hit big time. Till then, he will be a small-fry. The Delhi MCD elections will set the base for the big ones.
People vote for the small things in life, the everyday things, just as they vote for big aspirations. A clean uncluttered road is as
important as food at prices under control. Stepping to miss litter isn’t fun walking from home to the bus-stop.
Some people say the BJP has made a mess of Delhi’s garbage and landfills. Others say Arvind Kejriwal is a sham caught with his
pants down. What is striking is that nobody mentions the Congress, not even as an afterthought.
Holding Delhi is holding the centre. Delhi is not a full state. The Delhi government of Kejriwal controls health, education, electricity,
and water. But law and order, land, and the bureaucracy are the Lt. Governor’s domain who answers to the Union Ministry of Home.
That leaves the Municipal Corporation of Delhi. Whichever party holds MCD will be the party with an ear to the ground. Going
forward, getting the electorate, the grassroots, on your side is the winning formula to return Narendra Modi to a third term, which is all
that counts for a party on a mission to transform India to a template of its dream. 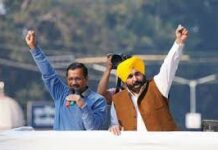