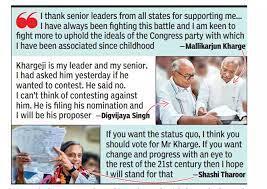 There was Sir C Sankaran Nair, the only Malayali Congress president in a 100 plus years.
He was elected in 1897. Nair rose from obscurity to prominence and left behind a big family
and a sprawling estate. A grandson was Lt. Gen. Candeth, the liberator of Goa. Those early
years, the attrition rate of Congress presidents was high—one Congress president every
other year. Shankaran Nair&#39;s tenure did not break the mundane trend.
Now, after more than a century, there is a Malayali in the fray. But whether Shashi Tharoor,
who hails from Nair’s native Palakkad district, will attain the pinnacle is doomed—he is not
perceived as the Gandhi family’s candidate. But he persists against mounting odds.
Tharoor is a brave man. He doesn’t mind being lynched by his own party men. The 9500
delegates eligible to vote will overwhelmingly vote Mallikarjun Kharge, whose honour it is to
be the Gandhi family’s undeclared candidate.
Tharoor goes into the fight with this special handicap.
Kharge Vs. Tharoor and Tharoor has no chance worth quoting. Kharge’s proposers include
an array of the “rebel” G-23 Congress leaders. Also, Saturday October 1, Kharge submitted
his resignation from the LOP, Rajya Sabha, post to Sonia Gandhi. If that doesn’t ensure that
the grand old party remains stuck in its self-inflicted rut, what will?

The yearly attrition of Congress presidents was laid to rest by the Nehru-Gandhi family years
ago with no regrets. The highest tenure record is in the name of Sonia Gandhi­—20+2
years. Ironically, this was the constant Rahul Gandhi wanted broken. &quot;No more Gandhi for
Congress president&quot; was a Rahul Gandhi template. The assumption was that without a
Gandhi at the helm, the Congress will turn a new leaf with a non-Gandhi at the helm!
The “bada payd” —mentioned by Rajiv Gandhi after Indira Gandhi’s assassination — will
rejuvenate from the grassroots. That, however, was not the only change envisaged. A fixed
tenure for the Congress President would also be a game-changer. The fact that some
Congressmen started talking of a Gandhi family president in the past tense was seen as
proof of a fresh wind blowing. Candidate Shashi Tharoor told a newspaper September 30
that the Gandhi family would continue to be regarded as “very significant leading lights” even
after a non-Gandhi is elected Congress President. Candidate Tharoor also spoke of the
“ghar wapasi” of millions of traditionally Congress voters who had fallen to the Hindutva trap!
All that said, there are actually two Congress now, one ensconced in Delhi’s 10 Janpath, and
the other marching towards Kashmir on the legs and shoulders of Rahul Gandhi. Which of
the “two Congress will survive five months when the Bharat Jodo Yatra winds up in Kashmir”
is the question?
Shashi Tharoor on his part has not left a shred of doubt that if elected he will be an
“independent-minded” Congress president.
The octogenarian Kharge is regarded as a “continuity with least change” candidate. He will
roll whichever way the Gandhi family rolls the dice. Mallikarjun Kharge is respected by
everybody in the Congress. At 80, his seniority is acknowledged and established. He is also
a Dalit, a paler version of the long departed Jagjivan Ram. Whether Kharge will be able to
sway the Dalit vote in the Congress party’s favour is fantasy mixed in the whimsical.
Kharge’s role in the Congress is fixed in the minds of the Gandhi family. Tharoor might as
well withdraw and be happy in the new Lok Sabha. This election is a farce clothed in
masquerade. Everybody including the mainstream media is acting out the charade. To them,
Kharge has already been “elected” and anointed.
Tharoor is the “change” candidate when the Congress “high command” wants “continuity
with change”, whatever that means. “Can Mallikarjun Karge ensure that?” The continuity,
definitely, but not the touted “change”. Mallikarjun Kharge is a fossil incapable of change, or
heralding change. For the most part, a fossil will only fill in space and till as long as there is a
Gandhi in the mix, Kharge will remain the fossil that will keep the Congress president’s seat
warm.
Five months to the day after Kharge is elected Congress president, and by the time the
Bharat Jodo Yatra has found its destination, Kharge’s real place in the Congress hierarchy
will be made known. The Gandhi family wouldn’t mind giving the post of the Prime Minister
to a non-Gandhi, like it did when Manmohan Singh was made Prime Minister, but for the last
40-50 years, the Congress President’s post has been for a Gandhi because the Congress
party is a Nehru-Gandhi property, for keeps! Shashi Tharoor will have to live with that fait
accompli!(IPA Service)