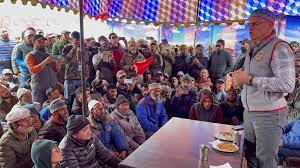 ‘Nobody can harm relation between J&K, Ladakh’
Srinagar, Oct 31: Criticizing the government for not
allowing him to address workers meeting at Dak
Banglow Drass, National Conference (NC) Vice
President and former chief minister, Omar Abdullah
Monday said that nobody can harm the relation between
Jammu & Kashmir and Ladakh.
Addressing workers at Drass, Omar said, “We (J&amp;K
people and Ladakhi people) have a strong relationship.
Nobody can change it even if they draw a fake line on a
map. We know how you are dealing with the situations,
how you are being ignored.”
About disallowing the programme at Dak Banglow
Drass, Omar said that they were not going to occupy the
city or take forward any revolt. “I was not supposed to
stay at Dak Banglow for my whole life; such things are
the testimony to the fact that they are not even able to
understand their own decision. If bifurcating Ladakh and
J&amp;K would have been your demand then they should
not have felt any hesitation. Having a mic or not would
have been no issue for them then.”
He said: “It is we who pressed for the programme today
here otherwise, were given a paper wherein we were
asked not to visit here. I was also chief minister for six

years but I am not able to understand such decisions.
What will happen after our meeting today, will it bring
any change on the ground.”
He further said that “China has entered into the land and
you are not able to send them back, but instead you are
not allowing us to visit Drass from Srinagar.”