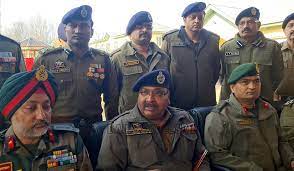 Anantnag, Nov 23 : Jammu and Kashmir’s Director General of
Police (DGP) Dilbagh Singh Wednesday said that the number of
active militants in South Kashmir is as less as it was never before
while as the number of foreigners as well as locals across the UT
has been confined to two digits only.

Addressing media men in Anantnag district of South Kashmir
after reviewing the security situation in southern districts Kashmir
along with the army officials, the DGP said that security situation
across south Kashmir has largely improved and there was a
significant dip in the crime related incidents as well.
“As far as the number of active militants in south Kashmir is
concerned, it is as low as it was ever before. There is no
complaint of people from anywhere in south Kashmir about the
conduct of forces,” DGP Singh said. About the killing of non-
locals and minority community members, he said that these acts
are highly condemnable and barbaric in nature. “Those involved
in the innocent killings were killed in various encounters,” he said.
The DGP said that the number of foreigners as well as local
militants across J&amp;K has been brought to two digits. “This is for
the first time that the number of total active militants has been
brought to two digits,” he said.
On local militant recruitment, he said that police and other
security agencies were countering the false narrative while
parents and religious preachers should also play their part.
DGP said that narcotics are a bigger crime than militancy. “We
have seized a huge quantity of narcotics over the years. We are
booking the people involved in the narcotics trade and slapping
them with PSA and other acts,” he said, adding that the property
of people involved in narcotics is being seized.
He said society should collectively counter the false narrative
launched by the neighbouring country including the Kashmir Fight
blog that issues threats to the journalists and other people.
“There is a frustration among the people sitting across as those
who would issue hartal and provoke youth for stone pelting are
nowhere and have been cleaned. The calls issued by the fake
chapter of Hurriyat across the border are being ignored by the
people of Kashmir,” he said.