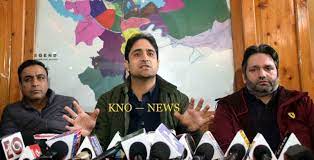 National Conference and Bhartiya Janta Party were in a
secret alliance and some representatives want him to sign
illegal documents and allow illegal constructions as well.
Addressing a news conference, Mattu said some
representatives are forcing him to sign the illegal
documents and also allow the illegal activities within the
City.
“Our differences according to them will end only if I sign
the documents and permit the illegal constructions and
other activities,” he said.
Mayor further said the government had stated that the
family rule will be put to an end, however, NC leaders
involved in bribery are being openly shielded.
“If NC has a secret alliance with BJP then why don&#39;t they
make an open announcement in this regard. If NC is the
way for change in Kashmir then we will bid adieu to
politics,” he said.
He alleged that incumbent Deputy Mayor and NC leader,
Parvaiz Qadri was involved in bribery as he has taken
over Rs 1 crore from the people so far.
“Enough proof has been given to the police in this regard,
but, I don&#39;t know for what reasons action is being delayed,”
Mattu said.