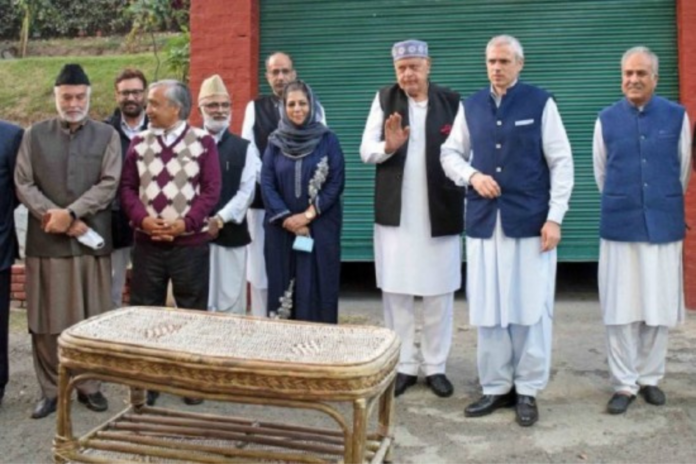 SRINAGAR, Dec 5: National Conference on Monday called for holding assembly elections in Jammu and Kashmir as well as the restoration of statehood to the Union territory and provisions of Articles 370 and 35-A.
The demands were the key features of a resolution passed by the party at a delegates’ session held to elect the party president at the mausoleum of National Conference founder Shiekh Mohammad Abdullah on his 117th birth anniversary.According to the resolution, the assembly elections have not been announced for Jammu and Kashmir even though the delimitation process has been completed.“It was promised by the country’s Home Minister that the much-awaited assembly elections will be held after the delimitation process is over. Now that the process is complete and the final updated voter list is out, still there is no announcement for assembly elections,” it said.
“Considering the political situation in J&K, this delegate session resolves that Articles 370, 35-A be restored to their original, undiluted form,” the resolution reads.It also demanded that the Centre should restore full statehood to J and K and announce the assembly election dates at the earliest.
“We urge the people of India to rise to the occasion and ask the BJP-led central government to remove injustices in J and K,” it added.
The other major demands of the party in the resolution included return of THE NHPC-owned power projects to Jammu and Kashmir and repatriation of prisoners from outside the union territory to jails within Jammu and Kashmir.
“JKNC is committed towards the upliftment and development of every weaker section of the society and welcome the steps taken for conferment of ST Status in favour of Paharis of Jammu and Kashmir. As assured, ST status already conferred in favour of Gujjars and Bakarwals shall not be diluted is also a welcome step,” it added.The National Conference also passed two other resolutions on press freedom and condition of economy in Jammu and Kashmir.
The party demanded that the media should be provided a free environment to operate and there should be no undue interference from any quarter.