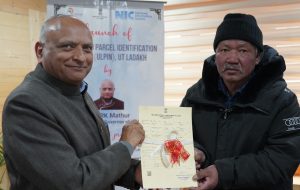 Jammu, Jan 20: Ladakh Lieutenant Governor R K Mathur on Friday launched the Unique Land Parcel Identification Number (ULPIN) in the Union Territory, with both hill councils of Kargil and Leh welcoming the initiative.
According to officials, the 14-digit ULPIN would help in the digitisation of land records and also reaching a conclusive land titling.
Terming ULPIN as a “game changer” and the next step in ‘SVAMITVA’ for digitisation and computerisation of land revenue records, Mathur stressed the importance of 100 percent coverage of land revenue records in Ladakh and completion of the exercise at the earliest.
He emphasised the need for the saturation coverage of not only the ‘abadi deh’ (inhabited) areas but the entire Ladakh by the administration with the help of both the hill councils through its own schemes and funds.Mathur shared the plans to increase the abadi deh area in Ladakh, including carving out abadi deh areas in wildlife sanctuaries and national park in Ladakh.
He said the administration, along with both the hill councils, will work with the Union Ministry of Environment, Forest and Climate Change (MoEFCC) to cover the increased abadi-deh areas in the UT.
“The UPLIN scheme will prove beneficial in numerous ways, including settling and expediting land-related disputes in court and addressing legacy issues such as putting a check on any unwanted change in land revenue records,” the Lt Governor said.
He also said the scheme would prove beneficial to farmers in availing loans from banks and also using drones to spray insecticides and pesticides on the registered lands of the farmers.
In a hilly region like Ladakh, Mathur said, the scheme would prove beneficial to collect accurate land records and land areas for hilly land to record the vertical dimension of land.He also stated that the scheme would be a blessing for industrialists and entrepreneurs and help in the overall development of Ladakh.
Mathur stressed the need to accurately settle land disputes with the help of computerisation and digitisation of land parcels using this scheme.
He expressed satisfaction to see Ladakh catching up with the rest of the country in the computerisation and digitisation of land parcels.
Mathur handed over property cards to five beneficiaries — Phuntsog Spalzang, Padma Gyalson, Tsering Namgyal, Tundup Tashi and Phuntsog Dolma — at the launch ceremony organised at Raj Bhavan Leh.
Chairman, LAHDC Kargil, Feroz Ahmed Khan said the ULPIN is a much-needed scheme in Ladakh as majority of the people residing in remote areas are unaware of land-related documents and the need to register their lands.“Such ignorance is resulting in land disputes. The digitisation of land parcels will enable the farmers to avail loans for development works,” he said.
Chairman, LAHDC Leh, Tashi Gyalson stressed the need for the digitisation of land parcels and remaining updated with the rest of the country.
He emphasised the need for a single-window system through which data becomes easily available and accessible.
Stating that the previous practice of capturing land records on papers often resulted in the loss of information due to the wear and tear of papers, he requested for digitisation of land keeping the original and existing land records in mind.