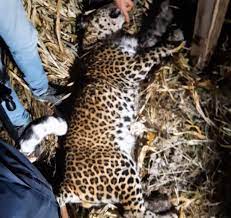 Waris Fayaz
Baramulla, Nov 24: The Wildlife department with the
assistance of Jammu and Kashmir police on Thursday
captured a leopard alive from Narwaw area of Kashmir&#39;s
Baramulla district.
An official from the wildlife department told that
department with the assistance of J&amp;K police captured a
leopard from Kalayban Narwaw village of Sheeri in
Baramulla after receiving a call from the area.
He said that the leopard was roaming in the residential
areas, posing a threat to the lives of people and their
livestock. However, soon after the information was
received, the leopard was captured alive without causing
any damage or injury.

The official also said that the leopard will be taken to a
safe location and will be set free.