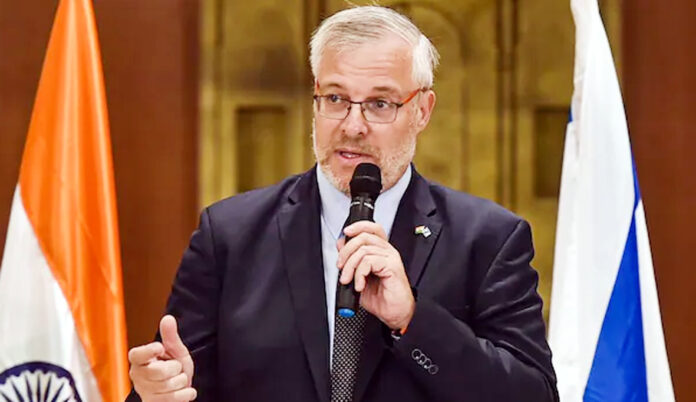 NEW DELHI, Nov 29: A day after Israeli filmmaker Nadav Lapid criticized Hindi film ‘The Kashmir Files’ at IFFI, the country’s envoy to India Naor Gilon slammed him, saying he should be ”ashamed” as he had ”abused in the worst way” the Indian invitation to him to chair the panel of judges at the film festival.
Gilon’s remarks, in an open letter to Lapid, came after the jury head of the 53rd International Film Festival of India (IFFI) described ‘The Kashmir Files’ as ”propaganda” and ”vulgar”.
In his speech at the closing ceremony of IFFI 2022, Lapid said on Monday that he was ”disturbed and shocked” to see the film being screened at the film festival. In the open letter put out in a series of tweets, Gilon said Lapid should be ”ashamed” and gave reasons for it.
”In Indian culture they say that a guest is like God. You (Lapid) have abused in the worst way the Indian invitation to chair the panel of judges at @IFFIGoa as well as the trust, respect and warm hospitality they have bestowed on you.” ”As a son of a holocaust survivor, I was extremely hurt to see reactions in India to you that are doubting Schindler’s List, the Holocaust and worse. I unequivocally condemn such statements. There is no justification. It does show the sensitivity of the Kashmir issue here,” he said.The envoy said Indian friends brought Fauda co-creators Lior Raz and Avi Issacharoff in order to celebrate the love in India towards the Israeli series and Israel. ”I suspect that this maybe also one of the reasons they invited you as an Israeli and me as the ambassador of Israel,” Gilon said.
”I understand your need in retrospect to ‘justify’ your behavior but I can’t understand why you told (Israeli) Ynet news afterward that the minister and I said on stage that there is similarity between our countries because ‘we fight a similar enemy and reside in a bad neighborhood’,” Gilon said in his open letter to Lapid.
”We did speak about the similarities and closeness between our countries. The minister spoke about his visits to Israel, it being a Hi-Tech nation and the potential of combining this with the film industry. I spoke about the fact that we grew up watching Indian films,” the envoy said.
Gilon also said that Israelis should be humble when India, with such a great film culture, is consuming Israeli content.
”I’m no film expert but I do know that it’s insensitive and presumptuous to speak about historic events before deeply studying them and which are an open wound in India because many of the involved are still around and still paying a price,” the envoy said alluding to Lapid’s criticism of The Kashmir Files.
Citing an interview to Ynet by Lapid, Gilon said the connection the filmmaker makes between his criticism of The Kashmir Files and his dislike to what is happening in Israeli politics was quite evident.
”My suggestion. As you vocally did in the past, feel free to use the liberty to sound your criticism of what you dislike in Israel but no need to reflect your frustration on other countries. I’m not sure that you have enough factual basis to make such comparisons,” he said.”You will go back to Israel thinking that you are bold and ‘made a statement’. We, the representatives of Israel, would stay here. You should see our DM boxes following your ‘bravery’ and what implications it may have on the team under my responsibility,” Gilon said.
The friendship between the people and the states of India and Israel is very strong and will survive the damage you’ve inflicted, Gilon said to Lapid.
”As a human being I feel ashamed and want to apologize to our hosts for the bad manner in which we repaid them for their generosity and friendship,” the Israeli envoy said.He said he did not write the letter in Hebrew because he wanted Indians to be able to understand. In his remarks at the closing ceremony of IFFI, Lapid had said, ”All of us were disturbed and shocked by the movie ‘The Kashmir Files’. It felt to us like a propaganda and vulgar movie that was inappropriate for an artistic and competitive section of such a prestigious film festival.” ”I feel comfortable to openly share this feeling with you since the spirit of the festival can truly accept critical discussion which is essential for art and life”, Lapid had said.‘The Kashmir Files’, which was released in theatres on March 11, was part of the Indian Panorama Section at IFFI and was screened on November 22.
It stars Anupam Kher, Darshan Kumar, Mithun Chakraborty and Pallavi Joshi among others. Former Israeli envoy to India Daniel Carmon also slammed Lapid’s remarks.
The ”unfortunate comment” by Lapid reflects his own and only his own views and total lack of basic sensitivity or knowledge of what he talked about, Carmon said.Ambassador Gilon’s excellent open letter this morning to Lapid speaks for all of us and reflects our true feelings, he said. ”As the Ambassador said-the friendship between the people & the states of India & Israel is very strong and will survive the damage the film maker has inflicted,” Carmon tweeted.”He (Lapid) definitely should apologize for his revolting personal remarks on historical facts without any sensitivity, not really knowing what he was talking about.I strongly urge our many friends in India not to be drawn by one person’s remarks to doubting the facts about the Holocaust,” Carmon said.