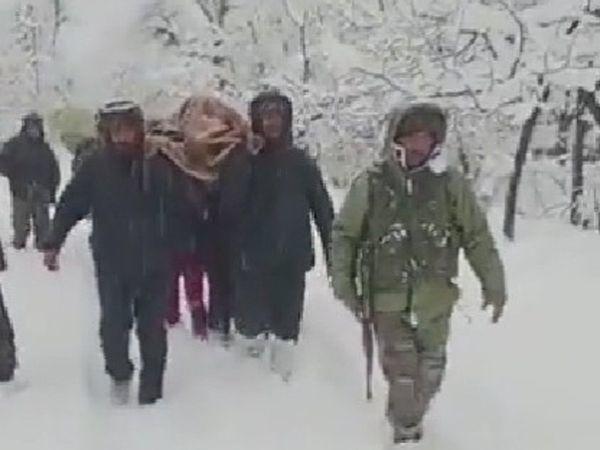 SRINAGAR, Nov 25: The Indian Army on Thursday carried an emergency evacuation of a pregnant lady from the Sumwali village near Line of Control (LoC) as she was in distress.
An official statement from the Army said that the lady, identified as Atara, 30, was having severe abdominal pain when the locals called and urged the officials for medical assistance for a two-months pregnant lady.
“On 24 Nov at 2100 Hr the Indian Army Post at Nala received a distress call from the locals requesting for urgent medical assistance to a pregnant lady(two months) Mrs Atara Age 30 Yr W/O Mr Rashid who was having severe abdominal pain. The Army Medical team at Nala post checked the vitals and planned emergency evacuation,” the Army release said.


It further mentioned that the villagers evacuated this lady from Sumwali to Chotali on a stretcher and meanwhile, a party of 00-01-04 with a Lt Veh rushed from Paro to Chotali.
Further, the lady was evacuated from Chotali to PHC Boniyar in the army vehicle with the Quick Reponse Team (QRT) of Torna Battalion.