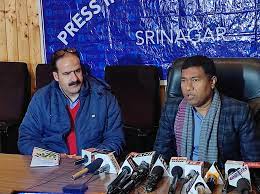 Srinagar, Nov 18: Union Minister of State for Labour &
Employment, Petroleum and Natural Gas, Rameshwar
Teli on Friday said that providing better avenues of
employment and increasing social security measures for
the youth and working class of Jammu and Kashmir are
among the top priorities of the Central Government.
Addressing the media persons at Tagore Hall Srinagar,
the minister highlighted the initiatives of the Central
Government under the leadership of Prime Minister for the
benefit of common people in the Union Territory. He said
that work on various development projects is going on at
full pace and the same will be completed ahead of the
stipulated timelines.
Responding to the questions of the media the Minster said
that unemployed youth are being provided loans on zero
interest basis and e-SHRAM cards are issued to tackle the
problem of unemployment. He said that the government
aspires to complete the target of issuing 38 crore e-
SHRAM cards in the country of which 30 crore cards are

already issued. The Minister further added that the
problem of child labour in J&K will also be taken up with
the ministry and addressed in time.
Later the minister participated in a delegate convention of
Trade Union Coordination Centre (TUCC) in which the
leaders and members of different worker unions
participated and deliberated upon the pending demands of
temporary, seasonal and other workers in different
departments.
Addressing the convention, the Minister assured the
delegates that the issues pertaining to the working force of
J&K will be put before the Central Government & the UT
administration for their early settlement especially
regularization of 61000 temporary workers and utilization
of services of seasonal workers. He added that the UT
Government will be apprised to implement the minimum
wages act as per the components of revised rates at par
with the other states of the country.
The minister highlighted the initiative taken by the central
government for the welfare of the workers. He assured the
leadership of TUCC for every possible assistance from his
Ministry for the early settlement of their genuine demands.
On this occasion, the Minister also inaugurated e-SHRAM
registration camp and issued sanction letters to Ujjwala
scheme beneficiaries.
General Secretary TUCC S.P. Tiwari, President TUCC
(J&K), Syed Ghulam Rasool Geeelani, J&K National
Trade Union Front President, Mohammad Gafoor Dar;
President J&K Civil Society Forum, Ghulam Mohammad

Hamdard and senior trade union leaders of J&K were
present in the convention.
He in Budgam said that the Central Government is
committed to provide better healthcare facilities to the
residents of the Union Territory of Jammu and Kashmir.
He said this during the inspection of the under
construction 100 – bedded Employees State Insurance
Corporation (ESIC), Hospital at SIDCO Industrial
Complex, Ompora Budgam.
The Minister said that the hospital shall cater best patient
care facilities and shall be equipped with all modern
machinery and adequate deployment of medical and para-
medical staff adding that ESIC is among the best
multidimensional social security schemes in the world.
The minister instructed the concerned agency to ensure
the construction of the hospital before the stipulated
timeline adding that the completion of this hospital will take
the number of ESIC functional hospitals in the country to
161 along with 8 Medical Colleges.
The Minister was apprised that the hospital is being
constructed at a cost of Rs 159 crore and shall have
modern healthcare facilities including 24×7 emergency,
OPD, IPD, Operation theatre, dental, maternity, ICU
wards, diagnostic Laboratories, psychiatric department
and all other health facilities.
In order to ensure ESIC benefits reach to maximum
beneficiaries, the Minister emphasized on registration of
more and more employees of factories and other