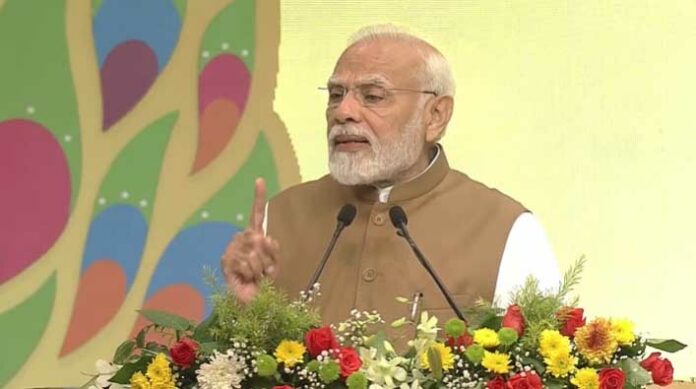 New Delhi, Nov 18: Prime Minister Narendra Modi on Friday stressed that all terrorist attacks deserve equal outrage and action and noted that the intensity of the reaction to the various attacks cannot be based on its place of occurrence.
The Prime Minister’s remarks came while addressing the third Ministerial Conference on Countering Financing of Terrorism in the national capital.
“We consider that even a single attack is one too many. Even a single life lost is one too many. So, we will not rest till terrorism is uprooted. Significant that this conference is happening in India. Our country faced horrors of terror long before world took serious note of it. Over the decades terrorism in different forms tried to hurt India but we’ve fought terrorism bravely,” he said.
The Prime Minister also underlined the need to strike at the “root of terror financing”.
“Nobody likes an area that is constantly under threat. And due to this, the livelihood of people is taken away. It is all the more important that we strike at the root of terror financing,” PM Modi said.
He said that there is no place for “ambiguous approach while dealing with a global threat” calling terrorism an attack on humanity, freedom and civilization.
“In today’s world, ideally, there should be no need for anyone to remind the world of the dangers of terrorism, However, there are still certain mistaken notions about terrorism in some circles. The intensity of the reaction to various attacks cannot be based on where it happened. All terrorist attacks deserve equal outrage and action. Further, sometimes, there are indirect arguments made in support of terrorism to block action against terrorists. There is no place for an ambiguous approach while dealing with a global threat. It is an attack on humanity, freedom and civilization,” PM Modi said.
In a statement, the Prime Minister’s office (PMO) said the conference will offer a unique platform for participating nations and organizations to deliberate on the effectiveness of the current international regime on Counter Terrorism Financing as well as steps required to address emerging challenges.
The conference will build on the gains and learnings of the previous two conferences held in Paris in April 2018 and in Melbourne in November 2019. It will also work towards enhancing global cooperation to deny finances to terrorists and access to permissive jurisdictions to operate.
“It will be attended by about 450 delegates from across the world, including Ministers, Heads of Multilateral organisations and Financial Action Task Force (FATF) Heads of Delegations,” the PMO said.
During the Conference, deliberations will be held in four sessions which will focus on ‘Global Trends in Terrorism and Terrorist Financing’, ‘Use of Formal and Informal Channels of Funds for Terrorism’, ‘Emerging Technologies and Terrorist Financing’ and ‘International Co-operation to Address Challenges in Combating Terrorist Financing’.
PM Modi earlier today inaugurated the conference while Union Home Minister Amit Shah will conclude the event, conveying India’s determination in its fight against terrorism and its support systems for achieving success against it.
On Thursday, India said that confirmation from China is still awaited while Pakistan and Afghanistan are not participating in the international event.
However, a total of 78 countries and multilateral organisations, including Ministers from 20 countries, have confirmed their presence at the two-day conference being organised on November 18 and November 19 here in the national capital.