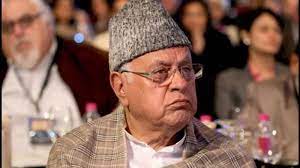 Srinagar, Nov 18: National Conference Friday hinted that
its incumbent chief and J&K’s senior most politician Dr
Farooq Abdullah may take rest from politics and the new
chief would lead the flock from December 5 this year, the
day when the party will hold presidential polls.
The party in its poll notification has choosen December 5,
the birth anniversary of its patriarch and founder late
Sheikh Muhammad Abdullah, for electing new chief. Dr
Farooq, however, will continue to remain the NC president
till the new chief is elected by the delegates on December
5.  “I haven’t stepped down yet. I will remain the NC chief
till elections for the post of president are held,” the
octogenarian leader, over phone. Dr Farooq was reacting
to media reports suggesting that he has already stepped
down as the NC chief.
As J&K has witnessed change in the political turf vis-à-vis
politics post article 370 revocation on August 5, 2019, NC
insiders said that party leadership from top to bottom felt
the need to infuse new energy into the UT’s oldest party.
“There was a yearning that the party needs to make some
changes in the leadership and also at the lower and

middle-rung level, so steps are afoot and electing a new
president is part of the same rejuvenation process,” said
one of the old guards of NC, wishing not to be named. He,
however, said that the party will continue to benefit from
“Dr Sahab’s decade’s old political career and his vast
experience.” “In simple words, he will continue to guide us
and we will continue to benefit from his political
experience. Electing a new chief doesn’t mean, Dr Sahab
will fly to London and settle there….,” he said.
NC Chief spokesman Tanvir Sadiq told that Dr Farooq will
not contest upcoming Assembly polls. “This is what Dr
Farooq sahab feels about elections…… Let’s see what
happens in the future,” he said. “Let elections take place
on December 5, and we will have a new party chief. Party
delegates will choose the new president.”
Interestingly, the party recently announced the names of
constituency incharge for Kashmir in a bid to raise the
morale of party cadre across the Valley. The new
constituency heads are frequenting their areas and
meeting people to gauge the ground situation, take
feedback from workers and to formulate “a new strategy
on the feedback received from ground zero.”
“The party is not in a sleeping mode and rather we are in
touch with our workers. There is no denying the fact that
post abrogation of article 370, the political atmosphere has
changed and we being the oldest party, are seeking
suggestions from our workers both old and new,” said a
newly nominated constituency in charge of the party,
wishing not to be named.

To a query whether Omar was set to take the control and
lead the flock after December 5, he said the majority of the
leaders in the party will obviously vote for Omar but “you
never know….” “NC believes in democracy… May be
someone else may emerge victorious as party chief….”
Party sources said that the name of new party chief will be
announced by Dr Farooq himself at the mausoleum of the
party founder Sheikh Abdullah at Hazratbal, Srinagar on
December 05.