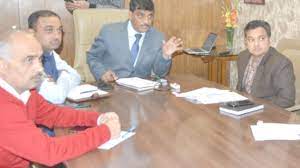 While interacting with the officers and representatives of Municipal Wards, the Chief Secretary impressed upon them to encourage maximum participation of general public in the programme so that the prime objective of this festival of development is achieved. He asked them to involve educational institutions in the celebrations of MTMP.

While interacting with visiting officer Udhampur district (Principal Secretary, School Education Department), Alok Kumar, the Chief Secretary asked him to involve the local public as well as municipal council representatives for the completion of prestigious Devika  project. He further asked him to take action against officers as well as contractors who are hampering the execution of this project.

Similarly, interacting with visiting officer for Jammu district Shaleen Kabra, Principal Secretary, Jal Shakti Department, the Chief Secretary asked him to keep complete tab on all the ongoing works in the district so that the Jammu City is made one of the cleanest and vibrant cities of the country. He highlighted that Jammu city has lot of potential as tourist destination and we must channelize our resources to make it one of the finest attractions in the country.

The Chief Secretary further asked the visiting officers of Jammu district to involve all wards of Jammu Municipal Corporation into the celebrations of MTMP besides educational institutions.

Likewise, interacting with visiting officer Ramban district (Commissioner Secretary, Forest, Ecology and Environment), Sanjeev Verma, the Chief Secretary impressed upon the officer to involve locals and other public representatives for developing Ramban as a tourist place owing to its significance due to NH-44.

During the interaction, the Chief Secretary also held deliberations with visiting officers of Khour, Bishnah, Bhaderwah, Bhakshi Nagar, Bari Brahmna, and other municipal wards and councils of Jammu division.