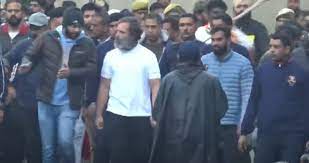 Jammu Tawi, Jan 24: Congress leader Rahul Gandhi led Bharat Jodo Yatra reached Ramban, the last district of Jammu on National Highway, after covering 120 kilometres and Pad-Yatra will resume from Bathi, Maitraand stay in Banihal for  a night while march for Kashmir will begin after Republic Day break, where it is scheduled to culminate January 30.

Sources told the yatra will resume from Ramban as per scheduled time 8.00 am and stop at Forest Check Post near Hotel Usman.

Earlier, the scheduled foot march started from Nagrota, Jammu. The foot march continued for a few kilometers but after advice of security forces, Rahul Gandhi boarded the car and reached the venue where few delegations including people of Ladakh apprised him about their grievances.

A delegation from Uttarakhand also highlighted the plights of the sinking Joshimath during the Bharat Jodo Yatra. A delegation from the hills state Uttrakhand joined Rahul Gandhi on the Jammu—Srinagar Highway near Udhampur and sought his intervention to save the hills town from further sinking.

Led by former Chief Minister Harish Rawat, the delegation raised placards “Save Joshimath—Save Uttrakhand” and participated in the foot march with the former Congress president, who also picked up one of the placards.

The team urged Gandhi to raise their voice in Parliament and other forums as the historical mountain town was fast sinking and might vanish soon.  Dalit activist Jignesh Mevani, bollywood actress Urmila Matondka, Former Congress Chief Minister Charanjit Channi and Member Parliament Ravneet Singh also among the attendees along with several social activists of Jammu and Kashmir.