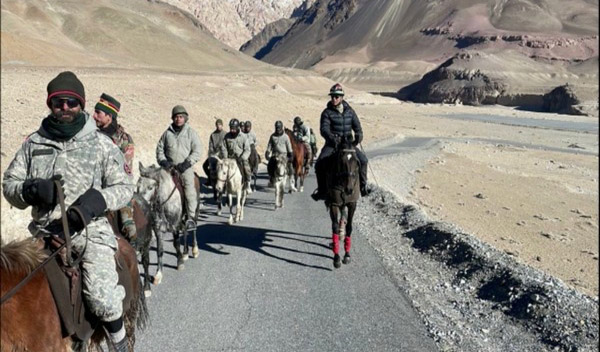 LADAKH, Dec 25: The Indian Army horsemen belonging to the Patiala infantry brigade travelled along the old winter silk route – Gapshan to Sultan Chusku in Eastern Ladakh, the army officials said.
According to the officials, they travelled 56 km in 21 hours at super high altitudes in sub-zero temperatures led by their brigade commander.
This comes days after the faceoff between the Indian and Chinese soldiers in Arunachal Pradesh’s Tawang sector on December 9.
Meanwhile, in the backdrop of recent India-China skirmishes, Gajraj Corps Commander Lt Gen DS Rana Rana appreciated the high morale of the troops posted in Yangtse, Tawang Sector.
According to Indian Army officials, Lt Gen Rana was in Yangtse, Tawang Sector at 16,000 feet during a forward tour visit.
On December 13, Defence Minister Rajnath Singh informed parliament that China’s People’s Liberation Army (PLA) troops tried to transgress the Line of Actual Control in the Yangtse area of Tawang Sector in Arunachal Pradesh and unilaterally change the status quo but they were forced to retreat to their positions due to the timely intervention of Indian troops.
The Defence Minister assured the Upper House that “our forces are committed to protecting our territorial integrity and will continue to thwart any attempt made to alter the status quo”.
For countering Chinese aggression on the Line of Actual Control (LAC), the Union government is carrying out infrastructure development in the border areas of Arunachal Pradesh.
The chief engineer of ‘Project Vartak’, Brig Raman Kumar said that the Border Roads Organisation (BRO) is developing and maintaining all road networks in the key border areas of western Assam and western Arunachal Pradesh. 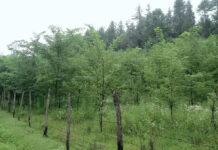