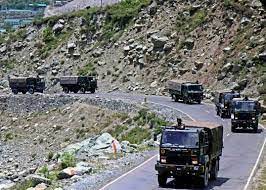 POONCH: The traffic movement on the Jammu-Poonch highway was stopped this morning amid
an ongoing massive search operation in the Nar forest area of Mendhar in Poonch district for the
last few days of security forces.
An official said that a combing operation was launched by the army several days back on the
apprehension of the presence of militants in the dense forest area.
As a precautionary measure, the vehicular traffic on the highway between Bhimber Gali and
Jaranwali Gali was suspended, they said. The traffic on the highway was also stopped on
Thursday after it was restored yesterday morning at around 8100 hours, they said. A police
official confirmed that the highway was closed again and said that the search operation was
continuing.