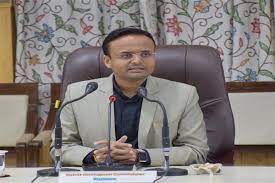 Agencies
Kupwara Jan 23: The District Administration Kupwara has decided to conduct ‘Kupwara Winter Carnival 2023’ from January 29 for
3 days.
Deputy Commissioner (DC) Kupwara, Dr. Doifode Sagar Dattatray today said that the first of its kind 3 day Kupwara Winter
Carnival 2023 shall be held at Dringyari Kupwara with effect from January 29 to 31.
He said all arrangements have been put in place for successful conduct of the Carnival.
He said that holding the Winter Carnival at Dringyari in the lap of picturesque Bangus Valley and Shamasbari mountain will be
the grand maiden effort to boost the tourism sector in the district.
The DC informed that various activities of attraction are being conducted in the winter carnival which include ice skating,
ATVs, Snow mobile, sagging bridge and zip line, besides, music, refreshment, food courts have been kept in the state of
readiness.
Dr. Doifode Sagar said that the winter carnival is the first of its kind in the district and the people have aspirations on the
carnival.

He asked the officers to make this carnival more attractive so that more and more tourists could visit and enjoy the beauty of
Kupwara district especially Drangyari which is the specified venue for the carnival.
He said the conduct of winter carnival shall boost the tourism activities in a big way which will create livelihood opportunities for
the local youth of the district. He hoped and appealed the youth of the district to participate in the Winter festival in large numbers
The DC directed all the officers to work in close coordination to make the carnival more effective and successful.
He said nature has bestowed Kupwara district with plenty of natural resources, lush green pastures, meadows and water
bodies adding that the beauty of these resources double during the winters when there is snow all around.